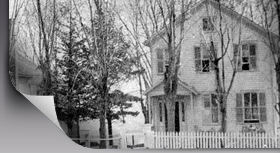 Like Nano Nagle, with characteristic courage and generosity, Mother Vincent Hennessy, foundress of the Dubuque Sisters of the Presentation, carried the “lantern” across the Atlantic. It can be seen today, lighting ministries of the Dubuque foundation in education, communications, faith formation, leadership, pastoral ministry, peace and justice, the arts, hospital ministry, spiritual direction and faith formation, Hispanic ministry, administration, social service, hospitality, community prayer and service.

Ellen Hennessy attended the school staffed by Presentation sisters in her hometown, Castlecomer, Ireland. Here she became a Sister of the Presentation, receiving the name Sister Mary Magdalen. After serving effectively in her home community, the Kilkenny Presentation community requested that she join them, not an uncommon practice among the small Irish foundations.

At Kilkenny there was another sister with the name Magdalen, so St. Vincent de Paul became the choice patron of our traveling sister and she became known as Mother Vincent Hennessy. Her responsibilities in Kilkenny consisted of assistant to the superior and treasurer. Some time later the Presentation Convent in Mooncoin requested her services. Upon her transfer, Mother Vincent was immediately elected Mother Superior; she served two terms.

On an October day in 1870, Bishop Hennessy, returning from the First Vatican Council in Rome, visited his homeland in Ireland, including Mooncoin. While waiting to confer with some priests, he walked about the village and noted a stately brick building that a young girl informed him belonged to the Presentation sisters.

The bishop called upon the sisters and upon introduction he was informed of a Mother Hennessy. No relationship could be identified, but the bishop continued his visit, speaking of the great need for missionaries in 19th century Dubuque Diocese, which comprised the entire state of Iowa.

A number of sisters expressed interest in the endeavor, but in the subsequent months Mother Vincent was the only one who persevered. She couldn’t, however, take on such a project by herself so she sought companions from former students and relatives.

Mother Vincent found willing souls in the persons of former student, Alice Howley, Alice’s cousin, Ellen Ahearn and Mother Vincent’s niece, Kate Reide. These four women, one sister and three generous, courageous women, left their homeland by boat, never to return. On November 9, 1874, they arrived in New York. Shortly thereafter, the Presentation missionaries boarded a train for Dubuque, reaching their destination four days later on November 13, 1874. Following two months of hospitality from the Sisters of the Visitation, they moved to their first home in Key West, outside Dubuque. Here they found an empty house with neither food nor furniture. Here, too, they endured months of extraordinary “pioneer” hardships, suffering from cold, hunger and serious inconveniences. Their faith and fortitude provided the foundation of the Dubuque Presentation congregation.